Our family lost our Disney virgin card. Yep, last week we hit Disney’s Magic Kingdom and it was the first time for any of us. And it was as great as people say it was. You may need to use the hashtag #happiestplaceonearth a few times again and again, but damn it, your kids will remember after a while. We prepped them well. My daughter watched youtube in the 32 days we had between booking and setting flight, and in that time she found out that the only place you can cry is the scary rides and the Haunted Mansion. She didn’t even need to cry then.

Oh and while it was our first time, I’m a DEAL queen! So yes, I’ll brag and say that we did Disney for less. But I’m not mean so I’m sharing my secrets to travel to Disney for cheap with you.

Here, I’m going to tell you how we did Disney for 4 people, with hotel, flights, rental car (optional), food and tickets for under $2200. We added in Kennedy Space Center as well, and that does add another $200 or so, but totally optional and recommended if you have a kiddo (or adult) who loves engines or space. Also, food on site at NASA is more expensive than the cheap options at Disney, so plan accordingly. 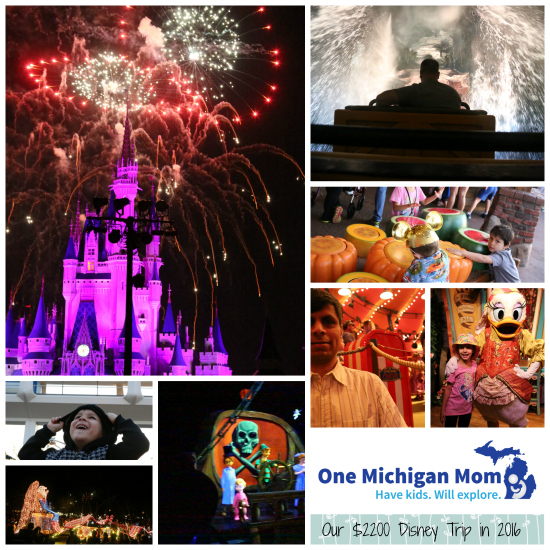 Be honest – you cannot tell by the looks on these kids’ faces that we skimped on anything now can you?

How to Save Money on Disney

My daughter just turned 8 today, so she was still 7 at our visit, but the big thing here is to note that she didn’t care about meeting all the princesses, so this means MAJOR savings on food and more time to be on rides. You see, if your child loves princesses, you may feel compelled to do a character dinner, which may run you $50+ a plate. That, however, is not for us. We did, however, use one fast pass to meet a few princesses and get extra signatures.

Next up, we saved on air fare and hotel by buying late and staying off site. Staying on site means a few extra hours of play time and some easier transportation, but that comes with a HUGE price tag. Instead, we shopped around and found the best deal through Marriott Vacations. We paid under $1200 for 4 round trip flights out of Detroit and 4 nights in the hotel. The bonus with a Marriott Residence Inn is that just booking this type of hotel helps you save money. How?

So, breakfast is all you can eat, and you eat well, and grab a banana for the way out. Many people headed out with it. That’s a free snack and saves you later.

Also, let’s not forget that since we purposely got a Marriott credit card, we save money because we USED that card. So that’s money we’ll get back later as well.

Anyway, here’s some specifics on how Marriott Residence Inn (and the like) can save you money.

The in-room kitchen helps because we carried boxed Annie’s Mac and Cheese for dinner one night. as well as having the option of storing yogurt and other perishables in the fridge. Butter from the breakfast and a few half and halfs, and you’re good to go. We also carried water bottles with internal filters because the water smells a bit off in all of Orlando it seems. (Bobble Water Bottle is what we carried for travel.

Another day we picked up Qdoba and so again, the 4 of us ate dinner for under $20. You cannot do that on site!

The top of the castle or the kids? #disneyworld #vacation

We ate lunch on site, and even if people tell you it is impossible, we pushed through on a 12+ hour day. So for best bet, I recommend heading to a place like the Columbia Harbour House (see their menu, with prices here). Columbia Harbour House isn’t far from “central” Magic Kingdom. Kids eat there for under $6 for the most part. The portions are decently generous, so we kept the grapes for a snack later that day. Adults can easily eat for under $10 as well.

Disney also has some vegetarian options. My husband managed with the vegetarian chili and fries. My daughter enjoyed the PB&J kids meal, which, is the smuckers pb&j that I refuse to buy at home, so it was a real treat for her.

Making the most of a short visit to Disney

Many people think you need 7 days for a full trip to Disney. Here’s the thing, my son is under 44” so Magic Kingdom is the place to be. The other parks have more height restrictions, so we did a two day ticket to Disney. We had one day be a go-go-go, day. The second day, we did the extras we wanted to see and stopped to meet Characters. Well, we did. My son didn’t want to meet those stuffed people. 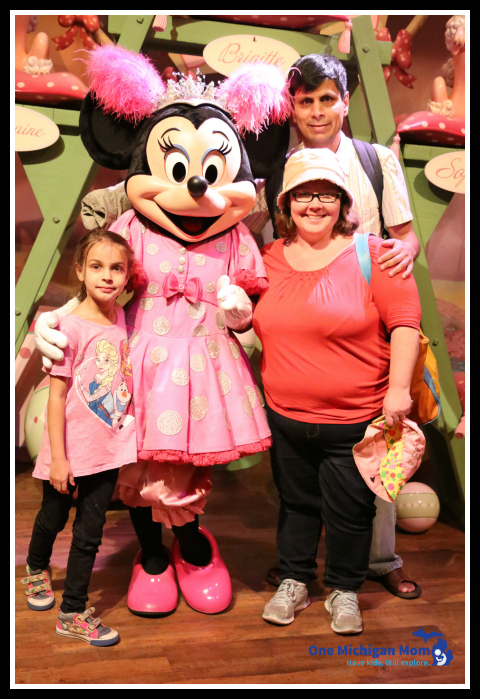 We stood in line for Minnie Mouse. Minnie, Donald, Daffy and Goofy are all housed toward the “circus” area of WDW Magic Kingdom, and usually that’s the smallest line for characters because it is pretty hidden.

We didn’t head back for a nap on either day. My husband took a small nap while the kids and I recharged on the Liberty Square River Boat. Feet were off the ground for a good 20+ minutes and they got to relax before we headed for more rides.

For the second day, we did a later start but still got a full day of Disney. We were at the park from around 11 am until around 8:3o pm (after the fire works). If you’re there on an early fire works day, most people head out with the fireworks, but you can still get a good ride in or two for some rides before the park closes for those who aren’t staying on site. We were done though. 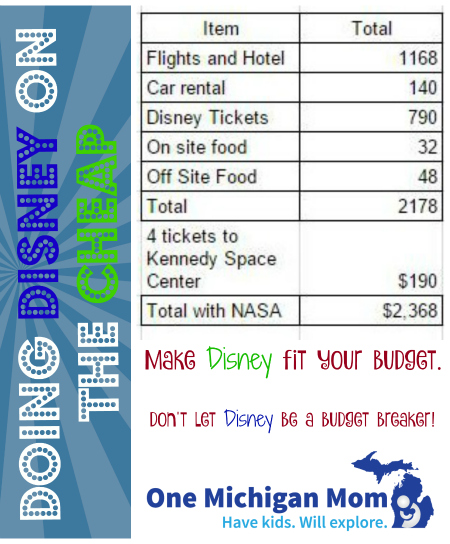 Making a Disney vacation without it putting you massively into debt IS possible. It means making decisions to forego a few extras, but still making it the “Happiest Place on Earth” – yes, just keep repeating it out loud, the kids catch on.

Adding it all up, without NASA (Kennedy Space Center), we came in under $2200. If we hadn’t done NASA, we likely could have done without the car rental, but that changed the flexibility, because the Marriott transportation was three morning options, three afternoon options. Plus, it allowed us to more easily pick up dinner one day (and cough drops).

As for souvenirs. Pre buy them at home and gift them to the kids. They all look the same, and it saves you a lot of money AND time. No wasting time looking for the right Winnie the Pooh Bear. More on that on another post coming soon! Be sure to subscribe to the blog to keep with the updates!

Disney will try to sell you a photo card to get all your photos for under $200. But, we have cameras. But, then again, I also didn’t pay for a photographer for our US wedding… And as you can see from the photo with Minnie, the Cast members (that’s what the workers are called at Disney) will take your photos for you. So, yeah, I’m cheap like that. The memories are in our heads, and be honest, when was the last time you pulled out your wedding album. Exactly. The same goes for those souvenirs, so watch for that post.

Save money, keep the memories, and stay out of debt.

Read guides, blogs and more to help find more hints to having a great Disney vacation.