The US, okay… no, a large part of the world, is wondering how the people of Flint ended up with tainted, poisonous water. I talked before about over reaching “bigger” government, and how, when local control goes away, we often end up with poor decision making (read it here). Well, what many people don’t realize is that the the reason Flint ended up with the change over from Detroit Water to Flint River water, was because Michigan has a system in place for “emergency managers.”

Under Public Act 72 of 1990, the state is authorized to intervene in units of local government that experience financial emergencies. So there have been a few instances of Emergency Management in Michigan since this public act was instated. The emergency management came into place in locations, including Flint and Detroit (when the State began the process against Kwame Kilpatrick, who the State began to investigate him which caused him to step down.)

Anyway, so yes, sometimes it works to get rid of bad local control. But sometimes, emergency managers do more harm than good. Yes, there’s more to the world than money. No, I don’t believe the government should be in to take tax dollars just to “create government-sector jobs,” but in the case of Flint water situation, these were water charges for the most part, which needed to be managed as part of the over all city budget. Rather than looking at all the issues, in Flint obviously, we know now, at least one MAJOR bad decision was made.

Here’s what I want as a takeaway from this post, the emergency manager that was in Flint when they changed the water, is now in charge of Detroit Public Schools. He wasn’t appointed by the school board, he was placed their by the State of Michigan. 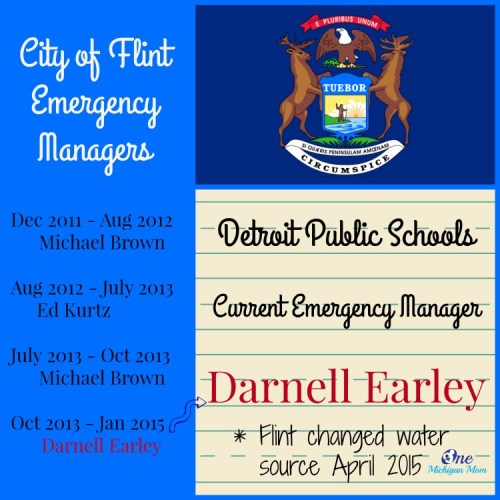 Is there corruption? Absolutely. Is it rampant. Most likely. Why is the state still having Darnell Earley in charge of ANY thing?

Yes, Detroit Public Schools is having a myriad of their own problems, including a lot of debt and a shrinking student population. But the biggest issue is that the environment in the schools is not safe for staff or students. No, I’m not talking about guns, I’m talking about health. It is so bad that the teachers there are having sick outs to hopefully bring light to their own situations. After Earley left Flint, he was appointed emergency manager of Detroit Public Schools. What are sick outs? The teachers call out sick to help bring attention to the issues at hand. What’s is at hand? Here are some tweets that include photos of the horrible situation in Detroit.

Hey Western, you may want to look at the curriculum of your MPA degree. Earley received a Master of Public Administration degree from Western Michigan University. Yeah, ethics may be something to consider in the courses, not just teaching to balance a budget. After all, Detroit has the lowest “scores” for students in big cities. I don’t think test scores tell the entire story, but they don’t lie that much when looked at from an aggregate.

For a fourth straight time, Detroit students have scored the lowest among big-city districts in math and reading, according to national test results released Wednesday.

Apparently all the oversight (aka, state management) over the last 17 years has not done a lot of good.

Yes, for those who’ve followed me, you know I’m not for big government and I’m for free-speech, free market and the likes. But, Detroit Public Schools is a large school district with a lot of public tax dollars at work. And, with teachers showing pictures of mold growing in the classrooms, we have to wonder what, if anything, has been done in the last year to not only create a balanced budget in Detroit Public Schools, but also to ensure a safe learning environment kids, and a safe working environment for teachers.

For those who are less worried about the kids and the teachers, you have to at least wonder where all the tax dollars are going. Kids aren’t learning. The health of the teachers and students are at stake. There are “No bid” contacts happening, and improvements aren’t being seen. What is happening in Detroit Public Schools under Darnell Earley?

The other part we must ask is why did the state appoint someone with no experience in education, education management, curriculum, or even educational leadership to be in charge of Detroit Public Schools?

As a mother. As an educated citizen. As a tax payer. As a damn human being, I have to ask why this situation continues. The latest emergency manager for DPS, Darnell Earley, doesn’t have a reliable record for making things better, so I’m asking that we all work to have him replaced. #replacedarnellearley