Scary Words: “Trust Me, I’m From the Government”

I recently posted in my weekly chatter about the qualms surrounding the tragic situation with Flint water. This is a horrible situation – obviously. Lead in water is not something we should see anywhere in the world, much less in a “developed” nation. Much less in a state known for water! Michigan has the longest freshwater coastline in the US and the second longest coast line in the US next to Alaska. Basically, we’ve got fresh water. 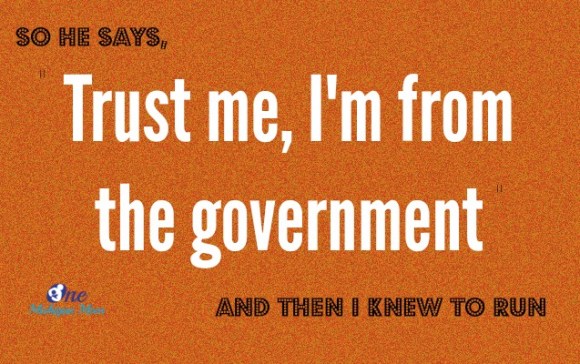 Cam we really trust any government? What can we do to protect ourselves when money says otherwise?

Why, then, does Flint have kids with lead poisoning and people dying of Legionnaire’s Disease?

When Flint, like many Michigan cities, were under a financial crisis, the city looked for ways to save money. Rather than take water from Lake Huron ala the Detroit Water System, they decided to get more “local” water from the Flint River while they attempted to finally change over to their “own” water from Lake Huron ala the Karegnondi Water Authority. It appears money and local politics prevented this from happening, in spite of decades of “trying.” As of 2009-10, they had a plan finalized to allow 10 areas, including the City of Flint, to get water from Huron River directly, rather than via Detroit. and it was estimated then to take 5 years. We’re almost 7 years in, and still nothing.

Now, a class-action lawsuit is abound because it is indicated that, even though people complained about the water not looking right, the state Department of Environmental Quality didn’t treat the water  according to federal standards. Is this a state issue or is it a matter of the authorities in Flint not taking heed to advice against making the

The use of the Flint Water, they allegedly were told, would required treatment for for corrosiveness of the water. Apparently, many water service lines in Flint are made of lead, thus, when the water went untreated for its corrosive nature, the lead leached into the water of the city’s homes. So, add that to the fact that the water from the Flint water is heavily polluted, and, in turn heavily corrosive, disaster is bound to happen.

Apparently a $100/day fix would have likely prevented most of this issue. But, then again, not allowing companies to pollute fresh water is another idea. Imagine that, right? When companies are let off the hook, we all suffer.

When the government is left off the hook, we suffer more.

The government, time and again, allows failures to happen by giving companies immunity.

Then they tell us “its okay” and that they’ll solve the problem.

How many times could the issue have been prevented by just not letting the sh!t happen?

Why do we continue to let the government get bigger and bigger? Instead, we need more local control. The people of Flint should demand that their water is clean again. Not with filters, but by no more pollution in the water.

But, the water around me worries, you say.

If you do feel like you need to purchase water filter systems, here’s a guide that was published by Penn State Extension office.

The other issue is astroturfing. There are major issues with “approvals” – and people are prevented from saying anything, because they’ve been conditioned to think that they don’t need to think. Yeah, confusing, I know. But really, we are all seemingly dependent on the government to tell us what is right and wrong. Instead of people asking WHY some things are okay in small amounts “sometimes” but never okay “other times,” we’re told to not worry about it because the government has us in mind when they make decisions.

They don’t. Some politicians do, but most, I must say, do not.

The smallest minority is the individual. And, sometimes, like in this water crisis, we need to think for ourselves. But to do that, we need to demand freedom. We need to stop giving away freedom too.

In Michigan, the Health Department is telling people the water in Flint is safe to bathe in, but we do know that some lead can be absorbed through the skin… and honestly, how many times do kids scrape their knees and then need to take a bath? What then? Something needs to be done to stop this from happening. It isn’t just about saving money – it is about the government sweeping issues under the rug and then “other” government coming in to “save the day.”

Sorry – to me, it is all one government. Bought and paid for by companies who aren’t held accountable.

People, it is time to rise. We need our country back. We don’t need more big government. We need local control and sensible thinking. It is time to ask around and find out if you still have “lead water service pipes.”

I see people asking for the Governor’s “head” – which is politics. But the people who really need to be held accountable are those who made the decision to move the water from Detroit Water system:  Flint emergency managers. Plus, anyone who “cleared” that water for use. Those who knew and said nothing later, should be held accountable too – but first and foremost, let’s look at those who made the decision and cleared it. You’d think someone would be testing that water, right?

It is also time to ask why we still have so much lead, mercury, and other known toxins in “safe” products and why we’re told there’s a safe amount. We depend so much on the government, yet they don’t keep us safe. After all, when was the last time the US has updated their list of “toxic” items? Decades. In the mean time, people have to look to what other countries are banning and independent research on toxic products because the government is busy ensuring individuals who watch their neighbors kids after school for a half hour are “licensed” and paying their taxes, rather than ensuring we’re not being poisoned by companies.

What examples can you think of where the government has failed to protect citizens?

Or, can you think of times when a government agency has overlooked people’s safety?