What’s the big deal about the different American Girl dolls?

I’ll admit it: we’re a bit doll crazy here. My daughter had her gymnastics/American Girl birthday party… and in the last year we’ve gone from no dolls to more than I’ll share with you (I’ve sold 2 before I gave them to my daughter, and I’m giving one away now!). But now, my big question is, I bought a doll off ebay and I’m going to give her a bit of a rehab, but I’m confused… WHICH American Girl doll do I have?

Why are American Girl dolls unique?

American Girl dolls are unique because they tell a story. I remember being above reading level of these books but checking them out every week when I was in 5th or 6th grade. Then, I continued to read them years later. So, while we were living in India, I kept bidding on the books on Ebay and when we arrived in the US, we had a stash of books my daughter wasn’t ready to read. But, now she is… And she also has a love for the dolls. I encourage it. A bit. Okay, a lot.

American Girl is an American line of 18-inch (46 cm) dolls released in 1986 by Pleasant Company. The dolls portray eight- to eleven-year-old girls of a variety of ethnicities. They are sold with accompanying books told from the viewpoint of the girls. Originally the stories focused on various periods of American history, but were expanded in 1995 to include characters and stories from contemporary life.

The dolls also come in small 6” variety, as well. They have tons of accessories and also Just like Me/Truly Me versions that don’t have a story but can attempt to “look” like the girls.

Okay, so which doll do you think we have? Is it Kirsten (amazon link), Girl of today 51 or Girl of Today 3? 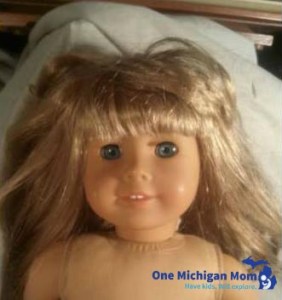 Which doll would you say this is?

American Girl dolls are of better quality than many of the dolls in the $20 range. Well, they better since they are 5 times that in price!

My husband didn’t see the differences in any of the dolls. But then I explained there are major differences:

Well, now I have a doll with blond hair, blue eyes, bangs and what appears to be the classic mold.

But, is it Kirsten Larson or a Just Like Me/Doll of Today?